Questions from the band, part 1

Questions from the Band
Each week during the intermission of rehearsals when announcements are generally given, I field
one or two questions from band members about conducting (eg. what.., how... , why…)

October 2 rehearsal
Q: How do you prepare a new score for rehearsals?
The first layer of attends to the overall structure as it relates to meter, tempo, and style.
Thick red lines are used to indicate meter and tempo. Thin red lines are used to indicate style such
as maestoso or andante. Major cues are noted with a purple color. Two letter abbreviations are used
for instruments such as TB, FL, and OB. Percussion cues use a combination of letters and symbols.
Key signature changes are noted by a straight thick semi-transparent violet color.
Dynamic changes are highlighted. Pink is used for increasing dynamics, and blue is used for
decreasing dynamics.  Accents are highlighted with semi-transparent pink dots.

A thin dark green color is used for a variety of interpretive elements. Individual tenuto notes are
indicated with an “e” (expression). Separation or staccato is indicated with an “s”.
Other words (eg. Rub.) or symbols are added as needed. Key harmonies are noted. 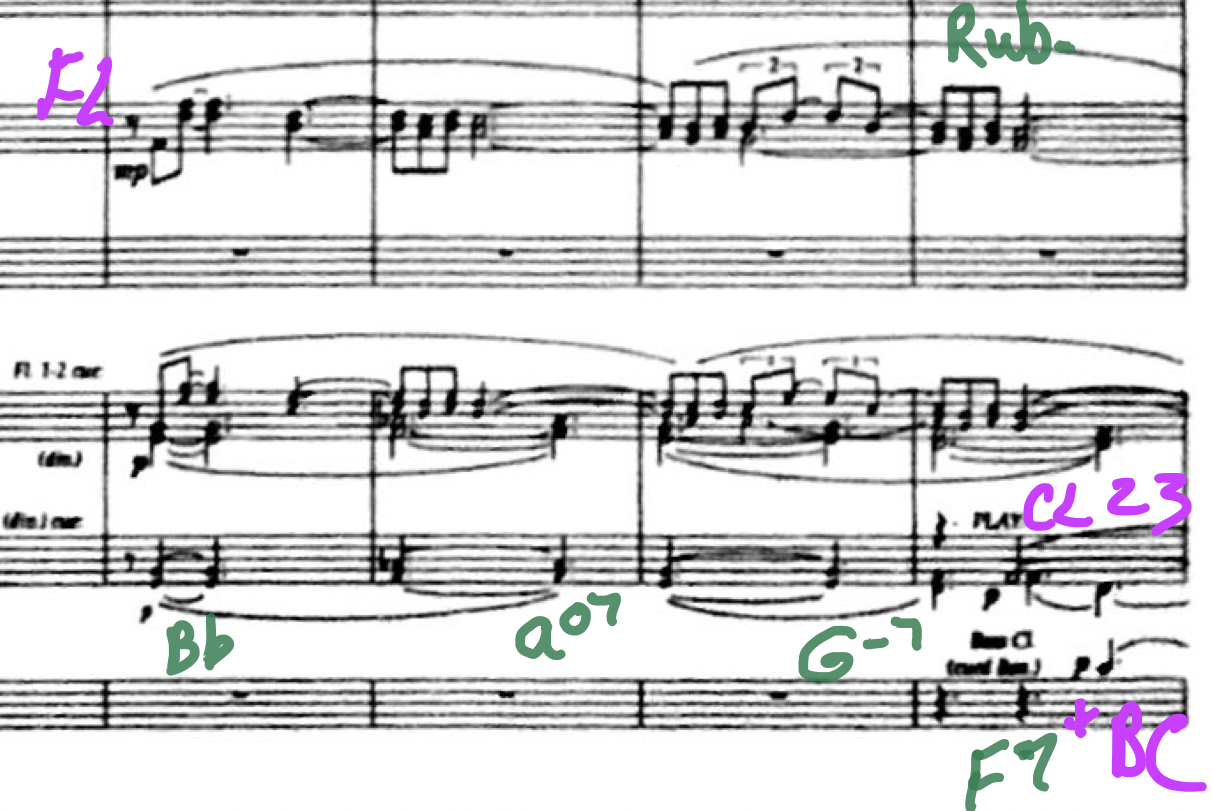 All of these preparations are made before the first rehearsal.  In successive rehearsals, other
elements (emotional contour, balance, etc.) are added.

Q: How did you prepare a score before the digital age?
Using digital color overlays on scores is highly flexible.  I can erase or hide all markings quickly and
easily. Before the digital age, I used pencil markings on the printed score. Pencil markings can be
erased as needed, but the process is not as easy as removing digital markings. After listening to a
rehearsal recording I marked problem spots with abbreviations: “A” (articulations), “D” (dynamics),
“I” (intonation), or “N” (note pitches). At the bottom of the score, I indicated stylistic interpretations,
harmonic progressions, or other notations.

Posted by Wayne Feller at 10:36 AM No comments:

Pacing and flow
Create a rehearsal workflow with value based time management using the formula V = C/T.  The value of a rehearsal segment (V) equals the Content ( C ) produced divided by the amount of Time (T) invested.
3 and out
Select and rehearse 3 segments before reading from beginning to end. The segments can be any order.
Read/react
Read all, then react to the results, identifying big picture issues.
Emotional contour
Identify and rehearse key places relating to the emotional contour of the overall form.  In particular, interpret the peaks and valleys
Segments
Select and rehearse segments of the overall form using overlaps that alternate reading and interpreting. Work from beginning towards the end. (Eg., AB, BC, CD, DE)
Overlaps
Same as “Segments” but work from the end towards the beginning (eg. F, EF, DE, CD, etc.). Read and interpret.
Interpret/read
Provide interpretive details before reading from beginning
Stop and go
Start from the beginning, but stop frequently as needed to fix spots.
Texture Layers
Identify the various layers of texture in a given segment. Rehearse each layer separately.
What Why How
Rehearse segments of the composition from the perspective of what is in the segment, why the composer made various choices, and how the lines should be interpreted.
Ignore the score
Memorize the tempo/meters of a segment. Rehearse the segment with eyes on the ensemble. Use an entirely aural approach for identifying issues.
Intensity with silence
Use silences in a musical passage that generate anticipation or tension.
Chizzel
Performers vocalize the rhythm of segment(s) using a “ch” sound for articulations.
Sing and play
Sing a passage, then play it.
Target Practice
Rehearse the most difficult segment of the composition , then read from beginning to end.
Storytelling
Tell short stories evoked from the emotional intention of the music.
Language-free rehearsals
Use only gestures (not words) to give instructions to the ensemble about musical interpretation.

Posted by Wayne Feller at 7:52 PM No comments:

Star of the North Conducting Workshop

Two rehearsals will give each of the guest conductors an opportunity to rehearse one or more
movements using the Star of the North as a lab band. A public performance will feature Lincolnshire
Posy conducted by the six participating conductors on April 20, 2020.

Professional Growth Benefits
Conducting is usually a solitary experience. A conductor generally selects literature, studies scores,
prepares for rehearsals, and leads rehearsals and concerts without guidance or perspectives from
others. This conducting workshop, however, will use collective wisdom and perspectives from peer
conductors and moderator to discover new meanings, interpretations, and performance techniques
of a masterwork in wind band repertoire.

Fees
There are no fees for participants.

Clock Hours
A certificate from the Star of the North will be issued to each participant recognizing 11 clock hours
of participation which includes individual preparation (2 hours), group score study and rehearsal
preparation (4 hours), rehearsals (4 hours), and concert (1 hour).

Posted by Wayne Feller at 9:09 AM No comments:

Our first rehearsal for the new season is Wednesday,  September 11th, 7:00 to 9:00 pm.
The rehearsal location is Fridley Middle School, not Totino High School. I have been working for the
past two months creating a literature planning spreadsheet for the coming year. Here is a link to the
document.
Star of the North literature planning 2019 - 2020

Note that I use this spreadsheet as an organic reflection of my literature planning as it progresses
throughout the year. As my thinking changes, so does the spreadsheet. For example, in the February
segment, there are titles called “Totino Concertos”. Later this fall, several students from Totino H
igh School will be selected to perform as soloists with the Star of the North. The literature for these
“concerto” solos will be determined by January, 2020.

Ordinarily, we would start the year reading through all of the music we will perform at our first concert
in November. However, I haven’t yet received the score for Mars from the publisher, and the Minor
Alterations piece is the wrong arrangement, so I had to re-order the correct version.  I’ll need to
collect all the parts for the “Diminished Minor Alterations” and return them to the publisher.

For this week’s rehearsal, I’ve added some previews of coming attractions (music for concerts in
February and May).
First Rehearsal Plan

Posted by Wayne Feller at 9:07 AM No comments:

The start of the new season begins well before the first rehearsal. for the upcoming year is an important task. It is also a highly enjoyable task as long as there are no time pressures.

My goal is to have a working spreadsheet that organically grows as my thoughts about literature
crystallize. A literature list is created which is at first simply a long list of titles and composers. This
initial brainstorming list comes from collegiate performance programs, browsing in libraries, YouTube
videos, carryovers from previous spreadsheets, Spotify, recommendations from individual musicians,
and catalog browsing.

Performance venues for the coming year frame the organization of the literature search. These venues
include a concert with a high school band in November, 2 concerts with holiday music in December,
concerto concert with the Totino High School band in February, a concert in late April or early May that
features guest conductors from the Star of the North Conducting Workshop, and several summer
concerts.  Different venues require anticipating the kind of audience in attendance. An audience from the
performance at the Minnesota Arboretum in winter will be somewhat different than an audience that
includes parents of performing high school musicians.

Each venue will also have a designated amount of time for the literature. The Redwing concert requires
about 40 minutes, the Como Park concert requires about 90 minutes, and the Edinburgh concert
requires about 60 minutes. When constructing a program for each venue, the length of each
composition needs to be carefully considered.

Sorting the spreadsheet shows the program and order for each venue. The order for each has its
own emotional flow. I use temperature to describe the flow: hot, cool, warm. Each selection also
has its own emotional contour. For example, the last movement of Holst's Second Suite in F has
peaks and valleys of emotional intensity, ending with de-escalating intensity and a last note spike.

Posted by Wayne Feller at 4:33 PM No comments:

Like most of the previous seasons of the Star of the North concert band, the 2019 season ended with a concert at the Como Park Pavilion on Sunday, July 21. It was the longest concert of the season in addition to being the last. The program lasted an hour and 40 minutes, which included a 15 minute intermission.

The performing conditions were ideal. The weather was not too hot, and there was just enough of a
breeze to provide coolness during the performance. The audience was large and enthusiastic. The
band performed very well, and the audience gave the band a standing ovation. The various solos
performed by oboe, flute, English horn, trumpet, sax, tuba, bassoon, percussion, trombone, clarinet,
etc., were beautifully played.

The overall theme for this concert was a recollection of some of the countries the Star of the North
has visited over the past 25 years. Remembering the trip to Italy, the band opened with Italian
Rhapsody by Julie Giroux. Compositions by composers from Germany, Argentina, Ireland, and
Norway followed. Strange humors by John Mackey was a composition about the system of
psychology/medicine introduced by the ancient Greeks. Vesuvius by Frank Tichelli was about the
Italian volcano that destroyed Pompeii and other cities.

“Friends” is the  Second movement of the composition by Vincent Kennedy. The movement describes
the feeling when friends make music together and making music together makes friends.  We
witnessed this in the final concert of our season, and we have witnessed this in our travels. Our band
trips over the years have included concerts in Australia, New Zealand, England, Wales, Greece,
Germany, Italy, Austria, Iceland, Norway, Thailand, Ireland, Hungary, Croatia, Portugal, Spain,
Argentina, Alaska, and (most recently) South Africa. When we share music with other (mostly amateur)
musicians, we share friendship.

As one season ends, the next season begins. For the conductor this means thinking about venues
and literature, topics for subsequent blog posts.

Posted by Wayne Feller at 6:14 PM No comments:


I uploaded a 5 minute video to YouTube called “The Leprechaun’s Dance”  to demonstrate a first
pass with score preparation. In 1916 Percy Alldridge Granger published the suite of piano
compositions based on melodies from Charles Villiers Stanford and Irish folk music. I arranged
the Leprechaun’s Dance for concert band in 2018.

Posted by Wayne Feller at 6:47 PM No comments: